I’m overdue a conclusion to the first part of my post on hair loss during chemo. It was an emotional post because losing my hair was a big deal for me. I felt more trauma thinking about losing my hair than my breasts because, to me, it was a more significant part of my identity. Now, a few months on from chemo and with regrowth in areas that lost hair, this is ‘part two’ which includes my verdict on whether the ice cap was a success for me…

Here’s what happened – round 2 to post-chemo

As I described in a previous post, the amount that fell out on the day of chemo round 2 was distressing. Thinking about that day, it evokes a feeling of sadness. However, the good news was that from then on, although my hair continued falling, it did so at a slower rate.

Overall, I lost about 80 per cent (‘scientifically’ measured using the palm of my hand to estimate the proportion of baldness to total hair space!). The hair loss was predominately around the crown of my head. I also lost some around the sides and back above my neck (where my headband rested to protect the skin by my hairline under the ice cap). My strategic comb over disguised it pretty well but I felt too self-conscious while out and about because hair was still falling out so I wore the wig when I left the house. Here’s what I looked like with the wig (before and after it went curly in the rain), the big section where I couldn’t save my hair and the ‘ponytail comb over’ that hid the baldness. 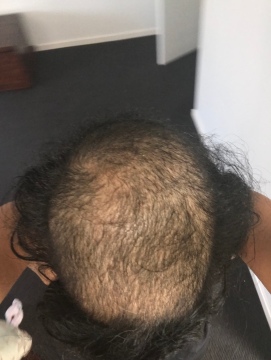 I took a big deep breath before uploading the bald head (plus a bit of regrowth) image. I never intended for it to be shared it on here – I wore a wig to cover it up after all and no-one except my husband has seen it (until now!!). However, I want to keep this real and honest and also show anyone who might be discouraged by emerging results of cold caps that saving just one-fifth of my original mane was enough to cover up the baldness. That said, every day I feared this patch spread and hearing “it’ll grow back” did not dissipate the sadness I felt. My heart would sink seeing even just a few strands of hair come away because I wasn’t sure if the ice cap was working. My hair was delicate and seemed to fall out with the slightest touch. It was like the way dead leaves on a plant fall off so easily. In the shower, the sight of my hair running down by body as I washed would fill me with dread and I’d promptly inspect the hair situation when I got out.

There were times when I was uncertain whether to continue but encouragement from others (including online breast cancer groups) spurred me on. Even at the point of finishing chemo, I was undecided about whether cold capping was an official success for me because I was still shedding hair. These pictures show the hair that came out in the mornings when chemo was over. 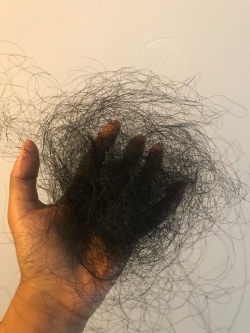 One month post-chemo – loss one morning

My eyebrow hairs and eyelashes came out gradually too. Initially, one eyebrow thinned out more than the other. At one point, I had one long eyebrow hair (plus some short regrowth hairs) which looked quite odd. At no point did I have completely bald eyes in terms of lashes or brows – they just became very sparse at most. I used brow make up to fill in gaps in my eyebrows and eye pencils to help define my lash-limited eyes. 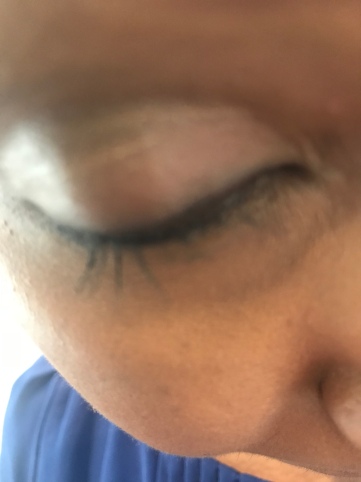 It is amazing what make up can do! Even though I felt sick, I didn’t want to look sick. This trickery wasn’t quite as straightforward as ‘apply and go’… Dabbing my forehead in the Queensland heat often wiped off or repositioned my drawn on eyebrows, returning home at the end of the day to interesting images in the mirror. I became cautious while carrying my cheeky daughter as she found it funny to pull on my wig – readjusting it in front of strangers was a little awkward! And I felt compelled to disclose I wore a wig every time someone commented on how good my hair looked – initially awkward but a surprisingly great conversation starter!

My eyelashes are still quite short but hopefully still growing. I made my first attempt at using my eyelash curlers (which have been waiting patiently in the drawer untouched since the beginning of chemo) – quite fiddly with the short hairs but a little victory nonetheless!

I can still manage a little ponytail and the regrowth is coming through in full force – it actually needs to be clipped down and I put a headband on to hold in the sides! I was incredibly relieved when the bald areas started filling in. My husband laughed when I started combing the little baby hairs but it felt good to do it and I read somewhere that it helps to stimulate hair growth too. This regrowth stage has been interesting and slightly amusing in some ways. My hair loss to regrowth transition has gone from Little Britain’s Andy “I don’t like that one” ring of long hair around the bald crown ‘style’ to hard-to-tame Wolverine-like growth.

A lot of this post might sound incredibly vain (and perhaps quite shallow) to some people. But, the thing is, just dealing with the fact that you have cancer can be distressing enough and I found that the impact of these side-effects only compound this feeling. It really was gut-wrenching to see my hair falling out and I prolonged that by trying to hang onto my hair. Now I can say that it was a part of the journey that I did get through with support from my loved ones. And I have got my original hair (some of it at least) that the regrowth can blend into so I am glad I stuck with the ice capping.

I've always been a story-teller and have lots of stories to tell. I hope that honest accounts of my personal experience of life events are helpful to others who might face the same. View all posts by midlifequandries

6 thoughts on “Hair again – through and post-chemo”