Chemo is over – hooray! I haven’t posted an update for while, partly because of the last couple of rounds were more upsetting than I expected and partly due to fatigue that hit me after round 3. I’ve also had welcome distractions through school holidays and a visit from my mother-in-law but I have wanted to continue to write about my experience. So here is my (better late than never) reflection on how the final rounds of chemo were for me…

The penultimate round (no. 3) – stubborn veins and, yes, more emotions!

There were tears even before I arrived at the hospital for my third chemo session. This was because, before posting my previous blog, I read it to my husband. I was just doing a final check before publishing it but, as I read it aloud, my eyes welled up more and more and I cried (again). At the time, the words evoked so much sadness for me and I felt vulnerable but it was good to let it out.

By the time we got to hospital, I was ready for the usual chemo routine. A different vein was chosen for the cannula because of damage from the previous chemo sessions (see pic). I think it looks worse than it felt as it wasn’t particularly sore, just a bit irritated and itchy. The ice cap felt much colder, I suspect because there was significantly less hair between my scalp and the cap, but it was still manageable. Once again, I had ice on my fingers for the first dose to help prevent damage to my nails.

When it came to the change-over of drugs my vein seemed to get blocked/restrict the chemo coming through. It hurt more as the pressure built and I shouted for it to be removed as I imagined my vein exploding! It was a little dramatic but it was painful and quite unsettling. The nurses suspected my vein’s reaction was due to the ice but it wasn’t a common effect. The application of heat pads helped temporarily but then the same thing happened with subsequent attempts.

There were a few discussions about alternative veins as I was running out of usable veins in my hands/arms. The removal of lymph nodes during surgery from my left side means avoiding needles to reduce risks of lymphedema, so my left hand and arm was out of bounds. And the main vein on the inside of my right arm was avoided too in case it was needed for an emergency. However, it was used for the last dose in this instance as a last resort.

The emotional overload totally wiped me out after this session and I fell asleep in the car on the short journey home. The side-effects were similar to those of round 2 but this time the fatigue really hit me. I was struggling to keep my eyes open in the week following chemo day. Luckily I was able to rest and give my body what it demanded. I find it incredible that some people continue to work while they undergo chemo, I didn’t even make it out of the house some days! 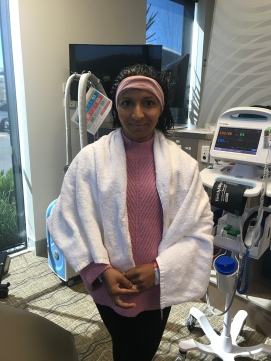 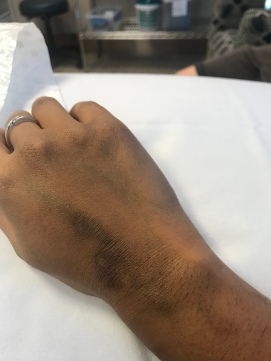 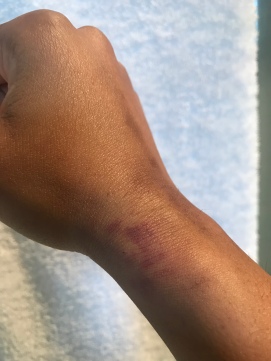 I was paranoid about my veins acting up again for my the final round. If I had any more rounds I may have been given a chemo port (a device implanted under the skin, through which the drugs are given instead of via an intravenous needle). But I was told it wasn’t worth it with just one more round. This time the position of the cannula kept getting stuck but, after a couple of failed attempts in the same vein, another vein was used successfully.

I didn’t ring the “chemo bell” in the hospital lobby to mark the end of my treatment following my last session eight weeks ago because the final rounds were more upsetting than I expected. I understand why some would want to but, the idea of ringing the bell, didn’t feel right to me for a number of reasons. I was happy about finishing chemo but it was another emotionally draining day and I just wanted to go home for hugs with my family. 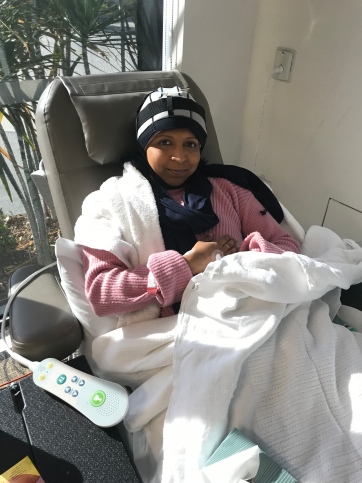 Reflections on my chemo experience two months on

Looking back to round 1, my main memory is of Day 4 when the side-effects first kicked in and I resorted to crawling around to play with my children because I felt grotty. Each round had a new challenge but I opted to undergo chemotherapy – I feel that the phrase ‘no pain, no gain’ is apt for this situation. I’m still undecided about whether the ice cap was a success (more about this in my next post!) but I’m glad I persisted with it.

Overall, I feel very grateful that the additional medicines helped to minimise nausea and other reactions. I’m also thankful that I didn’t get an infection while my immune system  was weak. All my nails are intact – a black spot on my index finger nail hasn’t resulted in any further damage. My oncologist said that the hot flushes and fatigue could last six months but I definitely have more of a spring in my step now that chemo is over. That said, there’s still a lot I need to work through – my physical and emotional recovery as well as decisions about potential reconstruction in due course. I’m thankful that I have the time and space to do this.

I knew this wouldn’t be a particularly upbeat post (another reason I delayed writing it!) but it has been helpful for me to put my experience into words. I’d like to read it again at a later date and reflect on this time.

Thanks again for reading and any comments!

*those of you following my blog might have received an unfinished version of this by email already so apologies if you have read this twice!

I've always been a story-teller and have lots of stories to tell. I hope that honest accounts of my personal experience of life events are helpful to others who might face the same. View all posts by midlifequandries

One thought on “Chemo – the final rounds”